As an art and exhibition form the panorama was invented in Scotland in 1787. In that year Robert Barker (1739-1806), an Irish-born painter took out a patent on his invention that he soon called ‘panorama’. The first building exclusively built to exhibit panoramas opened in London in 1793. It was designed to accommodate two panoramas simultaneously, on different levels. 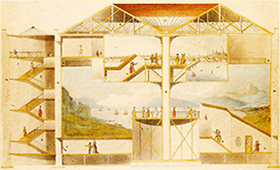 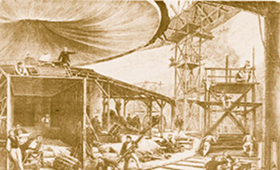 Section of the two-storey panorama building in London, 1801
Panorama painters at work, Paris 1872

In 1902 a panorama rotunda was erected in Altötting. In the same year the artist Gebhard Fugel, together with Georg Völkl (the architect of the rotunda) and panorama painter Josef Krieger, established a panorama company. With three artists being shareholders of their own panorama the Altötting panorama represented quite an unusual enterprise at that time as panoramas were usually commissioned by profit-orientated companies.

In order to get as close as possible to the historical truth of the panorama’s subject, the Crucifixion of Christ, the artists made use of documents and reconstructions. In 1902 Josef Krieger travelled to Palestine in order to make topographical sketches for the panorama. After one year’s work the panorama was opened to the public on 18 July 1903. 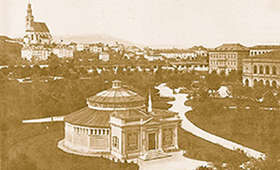 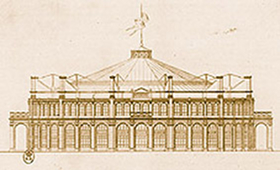 Altötting’s panorama is one of the very few surviving historical panoramas worldwide. In the nineteenth century panoramas were very popular exhibitions in Europe’s and America’s big cities. Usually the huge paintings travelled from one city to another and ended up worn out or being destroyed in one way or another. Altötting’s panorama, however, has survived on its original site, carefully preserved and privately run as a museum by Gebhard Fugel and his descendants for almost a century. A major restoration campaign was finished in 1989, the year of Altötting’s 500th anniversary as a pilgrimage site. In 1996 the panorama was transformed into a non-profit foundation named SPA Stiftung Panorama Altötting. It has been run as a museum by the foundation since then.

In the beginning of the twentieth century interest in panoramas slowly decreased due to the film as a new mass media. As an art form, however, the panorama has survived. Historical panoramas such as the panorama in Altötting are still a great attraction. Furthermore, new panoramas have been created in various countries such as Bulgaria, Egypt, Syria, North Korea, China and Turkey. In Germany the Panorama of the Peasants’ War by Werner Tübke opened in 1989 in Bad Frankenhausen (Thuringia) and the Staufer Panorama by Hans Kloss in 2002 in Lorch (Baden-Württemberg). In Berlin artist Yadegar Asisi is creating temporary panoramas using modern technology. In the year 2000 New York artist Sanford Wurmfeld painted the first abstract panorama. It is now in the collection of the Karl Ernst Osthaus-Museum in Hagen (North-Rhine/Westphalia).