Altötting’s panorama is painted in oil on canvas and consists of 27 strips of canvas that were sewn together. The painting measures 12 metres in height and 95 metres in circumference. Altogether the canvas comprises circa 1,200 square metres.

Painting a panorama has to be managed by a team of artists. In Altötting Gebhard Fugel (1863-1939) was the leading panorama artist. He collaborated with landscape painter Josef Krieger (1848-1914), a panorama-experienced artist. For painting the architecture Karl Nadler was engaged. Heinrich Ellenberger contributed information on the history and the archaeology of Jerusalem. He also supplied the painters with the correct architectural perspective. 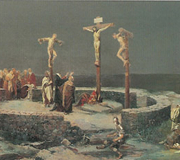 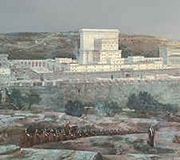 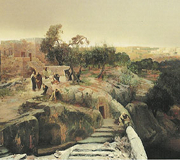 The Crucifixion, the Jewish Temple, the Apostles

Altötting’s panorama is the only original panorama depicting a religious subject to survive in Europe. In Germany it is the only panorama that survives from the classical period of panorama painting. It is listed as a protected historic monument.

Only two more Crucifixion panoramas exist worldwide. Like Altötting’s panorama they are situated at pilgrimage sites. The panorama at Einsiedeln, Switzerland, opened in 1893. It was destroyed by fire in 1960, but was re-created in a modern style soon afterwards. Another Crucifixion panorama is situated at Ste. Anne de Beaupré near Québec, Canada. It was first exhibited in Montreal, Canada, from 1889 to 1895.